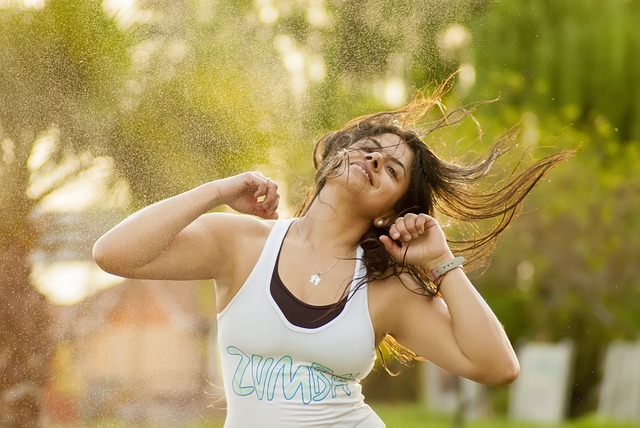 We all know that ballroom dance is a great workout. It’s the perfect combination of physical activity, social interaction, and even mental stimulation. Ballroom dancing is a great way to burn 300 calories a day while making new friends. There’s no doubting the truth that dance-is-exercise, but did you know the converse is true: exercise-is-dance? That’s right — one of the most popular workouts across the globe is ballroom dance-inspired.

You’ve probably at least heard about Zumba, even if you haven’t decided to try the program yet. The exercise fitness program is widely credited to be the creation of Colombian dancer and choreographer Alberto “Beto” Perez back in the 1990s. By now, the passion for Zumba has grown to some pretty amazing numbers:

It’s hardly the first fitness program to borrow from dance. Many fitness studios and gyms will offer hip-hop dance classes, and we’ll never forget Jazzercize. But Zumba seems to have caught the imagination of faithful participants, with its exotic and exciting blend of fitness, music, and of course dance.

Beto Perez was an aerobics instructor when he developed a class called “Rumbacize.” Sound familiar? The Rumba is a type of dance taught here at Fred Astaire Dance Studios and is characterized by a smooth, subtle hip motion and a heavy walking step. “Rumbacize” eventually became Zumba, and a fitness craze was born. Any experienced ballroom dancer will recognize some of the dance styles that have been incorporated into Zumba, many of them Latin style dances. In fact, ballroom dance classes can add an extra element of depth and fun to your Zumba workout, as you can add stylistic elements and “flair” to your moves that the instructor may not necessarily be adding into the routine. So what dance and music styles should you be on the lookout for? Let’s go over a few!

Dancing Your Way to Fitness

Just like Zumba, ballroom dancing is a great aerobic activity that burns some serious calories, blasts fat, and boosts your metabolism. It makes sense, since Zumba is based on so many ballroom dance and music styles. Click on the links below if you want to see and hear an example of each!

RUMBA – The hips do most of the work, as is common with many Latin dances. The Rumba rhythm is “slow-quick-quick.”

SALSA – This dance has its roots in the Rumba and is continuously evolving. New, modern dance styles are named according to the geographical areas where they are developed.

MAMBO – Why is the Mambo so popular? Maybe it’s because it can be danced to suit all different types of dancers — slow or fast, conservative or open. No matter how you dance it, the Mambo is one of the most popular and enduring Latin dance styles.

MERENGUE – Both Haiti and the Dominican Republic lay claim to the Merengue as their own. Both tell versions of an origin story that centers around a man with a lame leg who wanted to dance, and not feel self-conscious.

SAMBA – The Samba is a very spirited dance as it is performed in the U.S., but in its native country of Brazil, the tempo can be somewhat slow. It still ranks very high among favorite dances.

TANGO – Is there a ballroom dance style more embedded in the public psyche than the Tango? Maybe the Waltz, but the Tango is one of the most famous and highly stylized ballroom dances.

Ballroom dancing and Zumba are both great fun and great exercise. You don’t have to choose one or the other, but instead, consider letting one complement the other. Call your local Fred Astaire Dance Studios to see if they have a class for you!